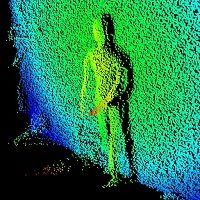 In Germany live around 200,000 blind and more than 1 million visually impaired people. The possibility to practice sports is very limited for visually impaired or blind persons. Traditional devices as the white cane or a guide dog are as well as today’s existing technical systems, intended for navigational purposes during walking, not appropriate for running demands. Visually impaired or blind joggers are dependent on an accompanying person who transmits direction instructions by a commonly grasped rod or audio commands. An entirely self-determined training independently from time schedules and the availability of a guide is therefore not possible. Additionally the dependence on other persons and the missing possibility to conduct sports alone is often felt very restricting by the involved people.

In the transfer project „Sensor-guided Jogging“ of the interdisciplinary centre for embedded systems (ESI) an embedded navigation system is developed which enables his or her visually impaired or blind wearer to follow his or her running track safely in a structured environment (e.g. on a standard running track). The environmental information which is gathered by 3D sensor technology has to be interpreted in real time to generate necessary tracking and obstacle information. These are transferred to the jogger by a special feedback system (vibration/ audio signals) so that he or she is able to evaluate the current environmental situation at any time.