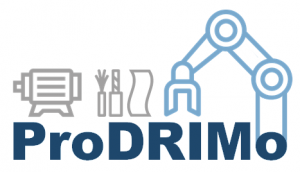 Using advanced sensors, actuators and methods of artificial intelligence (AI), robots are increasingly turning into learning systems that interact with humans, make decisions and take on more complex tasks. As a result, new application potentials are opening up that go beyond the classic application areas of industrial robots. Especially the production of electrical machines, whether electric motors, generators or transformers, is still characterized by manual assembly operations due to limp materials and components. Due to the high wage level in Germany, processes that require the handling of limp insulation and wire materials are increasingly being relocated to foreign countries. This trend is particularly noticeable among medium-sized manufactures, who generate a large part of their sales from the production of customized electrical machines in small to medium quantities. Therefore, the aim of the ProDRIMo research project is to explore innovative system solutions for robot-based assembly of limp insulation and wire materials, contributing to the automation of previously manual processes in the manufacture of electrical machines. The key technological enablers are novel tactile and optical sensors, high-performance hardware, mechatronic end effectors, and AI-based methods for perception and control. On behalf of all manufacturers of electrical machines, the researched system modules are being tested on the basis of two concrete application examples. In the long term, the developed solutions can also be transferred to other areas of the electrical industry.