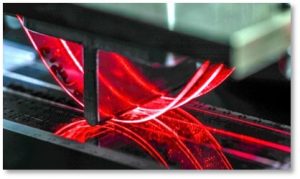 Light signals in optical waveguides can be used to transmit vast amounts of data quickly without interference. In the industrial and infrastructural sectors, e.g., in the automotive and aerospace industries, there is an increasing demand to exploit this potential further. What production processes should look like to integrate the best systems that transmit data through the light into existing components is a central question for current research.

There have been some technical limitations in this regard, such as difficulty transferring the signal in the optical waveguide to other optical waveguides without losing the signal. These and other challenges are being addressed by the DFG research group “Optical Packaging and Interconnection Technology for Assembly-integrated Bus Systems (OPTAVER),” in which researchers at Friedrich-Alexander-Universität Erlangen-Nürnberg (FAU) are taking on key-tasks.

A subproject at FAU investigates the possibility of printing light-conducting materials onto arbitrarily shaped surfaces using precise aerosol jetting. The polymer core materials for the optical waveguide are finely atomized and directed to the material surface by means of an air stream. In this way, optical waveguides can be deposited to surfaces of any shape. This process can simplify the connection of devices to the optical data transmission system, as they can be easily printed on with the polymer inks. While the first phase of the project was aimed at selecting suitable materials and developing a printing strategy in 2D, the second phase focuses on the 3D capability of the process and the characterization of the waveguides.

In another sub-project, the FAU researchers use computer simulation to investigate whether the light signal reaches the desired nodes without interference. For this purpose, the attenuation of the light signal within a specific conductor path is simulated with the so-called ray tracing aid. In a connected design program, specific optimizations can be made to the 3D course of the optical waveguides as well as their cross-sectional courses. The findings on suitable geometries for successful data transmission are then incorporated into design rules for optical waveguides so that no new simulation will be necessary for later industrial use.

The Institute for Factory Automation and Production Systems (FAPS) and the Optics Design, Metrology and Micro-optics (ODEM) group from the Institute of Optics, Information and Photonics are working to solve existing problems in signal transmission in bus systems.

As part of the nationwide OPTAVER research project, the other participating institutions in this research work include the Institute for Transport and Automation Technology (ITA) at Leibniz Universität Hannover, the Laser Zentrum Hannover (LZH), and the Institute for Packaging and Interconnection Technology of Electronics (IAVT) at Technische Universität Dresden. The German Research Foundation (DFG) has been funding the OPTAVER research group in the two phases for six years since 2015. Research work of the second phase (OPTAVER II) started in 2018.