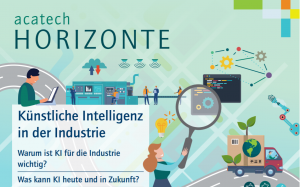 In the acatech HORIZONTE series, the German Academy of Science and Engineering (acatech) investigates important fields of technology that are clearly emerging. The fourth volume examines the ubiquitous topic of artificial intelligence. With vivid illustrations that can be understood by everyone, it shows what artificial intelligence is, where it is already applied in industry and what might be possible in near future. It also deals with the questions of where Germany stands in international comparison, what role ethical aspects play and how artificial intelligence affects the labour market.